So the funny thing about me buying the Beast Mother (a preview) is I looked the artist who drew it in the eye as I paid for it and I felt a little bad for her because I thought I was buying her boyfriend’s work and not any of her books. Only I was buying one of her books, I just didn’t realize it.See, I met Eleanor Davis for the second time at the Small Press Expo this past October. She and her boyfriend, Drew Weing, were there and they had also been there the year before when I went.

They share a table at the shows, collaborate together and promote each other. They are both immaculate draughtsmen and a charming couple. They like to give you their books in brown paper bags stamped with “Little House Books.” Very indy-chic.

One of my favorite mini-comics from the 2005 Expo had been Drew’s “Blar” (a preview). “Beast Mother” looked so much like “Blar” to me that I really thought it was Weing’s work, and not Davis’s. That’s why I felt bad about it. I thought I was only buying her dude’s work, and none of hers. Turns out I bought a little of both. Davis draws all kinds of different ways.

If you look at her website or one of the anthology books that she and Weing have done, she never really seems to use the same style twice.

You’d seriously think that a whole different artist had done her stuff sometimes when you look from one story to another, which is weird. I can’t think of many artists whose line I can’t recognize from piece to piece, even if they do change up the overall look.

Davis seems to be remarkably flexible (and maybe a little indecisive, too, but she’s young, with plenty of time to focus).

Both Weing’s “Blar” and Davis’s “The Beast Mother” draw heavily on myth. “Blar” is pretty straightforward. It’s about a completely unstoppable hero. The crowds go wild for him. You have to love it. Especially since he has a tiny little head and a sword as big as his whole body.“The Beast Mother” is more subtle. I don’t want to give it away for you, but it’s just 20 pages long. Yet, Davis succeeds in altering your loyalty as a reader. You will betray yourself. She totally sets you up with this one. The story is about this naked giant woman who’s tending a large brood of naked little children in the wild. Plus, there is a hunter with a flintlock rifle. I’ll stop there. 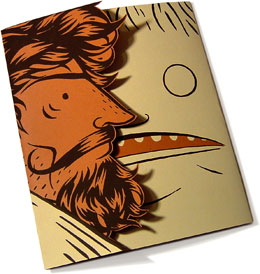 “The Beast Mother” is also a well done example as comic-as-object artwork. Though I’m a little torn about this trend in comic art. Artists frequently choose to bind their work in complicated and expensive ways. I’d be afraid to say by what percent the fancy cover bumped up the price on this baby. Don’t get me wrong, this is some of the most elegant design work you’ll see. It’s a foldover cover, in which a die-cut profile of the hunter overlays about a third of an inner flap that’s completely overun with the Beast Mother’s face. She put the title on the back. It’s a two color silk-screen (I think), of strong and textured matte paper.

Really, really eyecatching design. But $5 for a 20 page black-and-white comic? There is a reason why Joe Average is a little hesitant to check comics out, and the prices just keep getting worse.

But really, all this high minded stuff may be interesting, but let’s hone in on a really important issue: boobs. I really focused on the boobs when I read this book. Boobs, boobs, boobs. The Beast Mother has these tremendous boobs that look more like floppy punching bags than breasts. She could also be called “The Breast Monster” instead of “The Beast Mother,” you know?

And, for the non-comics initiated, you have to understand: in the aesthetic of sequential art, breasts may be the single most idealized icon in the cannon. Flip through a dozen, nay - a hundred, nay - a THOUSAND mainstream comic books. Find one page with any woman with anything less than completely luscious breasts. you won’t see it. It’s not much different in indy-comics, either.

In fact, they go so far beyond luscious sometimes that an all-girl comics journalism collective launched a regular feature called “Bizarre Breasts,” in which they picked out a favorite example of unearthly boobage every month, posted it on their site and talked about how crazy the boobs were. Here’s an awesome example. Though, ironically, check out the same site’s essay on “How to Draw Breasts.” See any examples of drawing saggy, worn out boobs? No. Even a feminist art collective can’t stand the thought of seeing gross breasts in a comic book.

That’s how deeply ingrained this pretty-boob aesthetic is.

So Davis’s comic rebels flagrantly on the breast-front. The boobs in here are really gross, but they are a major and lively feature of the story. From feeding the babies to accentuating the monster’s movement and position to dramatizing the impact of her falls. These breasts flounce and flail in ways that (I promise) will not titillate the male mind at all. In fact, you’ll be a little nervous about the next pair of naked breasts you see for the first time. Man.

Davis’s willingness to to de-mystify breasts for us is probably due, in part, to her being a woman herself. Both genders are considerably less fascinated by our own anatomy than we are by the others (we are more detached from that which we are attached). That said, the love of pretty cleavage is cultural. Like I said, even the girls at Sequential Tart are prey to it (they mainly don’t like boobs that are too big or too puffy, not boobs that are too pretty). Davis is not mystified. Are we better off for it? Hell if I know, but I would be curious to know if that were part of her aesthetic agenda in making this book.

The story closes in a touching and thoughtful manner. It lets you wonder about what happens next to the children and what’s going on in the mind of its major actor. If you want to check it out yourself, you’ll probably have to go to Drew & Eleanor’s joint site, Little House Comics and order it ($5 PLUS SHIPPING - my god).

It’s a worthwhile investment, just be careful with it and don’t let the hunter’s face get all bent up.

This post was originally published on Philebrity, during a takeover by The Daily Miltonian, at the end of 2006