Kick the ass of a banker 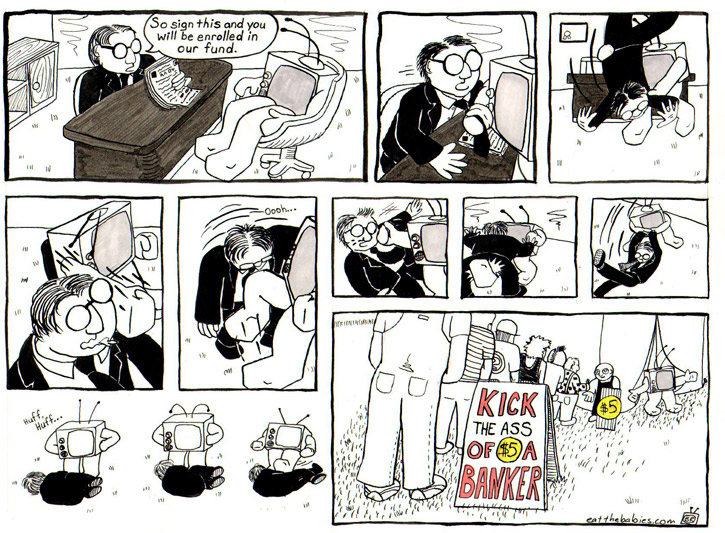 To me, the difference between now and The Great Depression is that we have all gotten trained to be deferential to rich people. If they are rich, they must be doing something right, right?

Sure, Occupy Wall Street happened, but let’s be honest: the yoga instructors and massage therapists are never going to lead us all out of bondage. The fact is, as much as this banking crisis story has bugged people, the large mass of men really aren’t ready to do anything about it. That’s why, on the face of it, I thought Occupy Wall Street was cool. Obviously, I supported them 100%, but I couldn’t go down to City Hall and camp out with Occupy Philly. My gut told me that it would go nowhere, and if it wasn’t really anything but a big social event for lefties (at the end of the day — even if it was a photogenic and nobly intentioned social event), I couldn’t justify spending time there. That’s not how I like to socialize.

I am not saying this to minimize what they did. You gotta try, right, and whomever tries is the right person to try. As I have always said, “We are the ones we’ve been waiting for.” My real criticism goes to the rest of lazy America. Or maybe not even lazy. Maybe not even complacent. Most people, I think, have been lulled into thinking that there really isn’t a problem with disparities in wealth. Back when I used to do work with poor folks, my old boss had an explanation for it. Americans, he always said, don’t like to engage in class politics, because they all secretly believe they are going to be rich one day, too.

Bankers, in particular, should draw a particular ire. Could someone tell me why it would be impossible to run a 3-6-3 bank now? You should listen to this interview on Planet Money with a former fund manager. He just wrote a book called Extreme Money, where he describes how he watched finance go from a back of the house, structural aspect of doing business, to the central profit center of business itself.

How do we all benefit if businessmen are making most of their profits playing games with their cash flows? It seems that we don’t, to me.