After staring into the abyss for a while 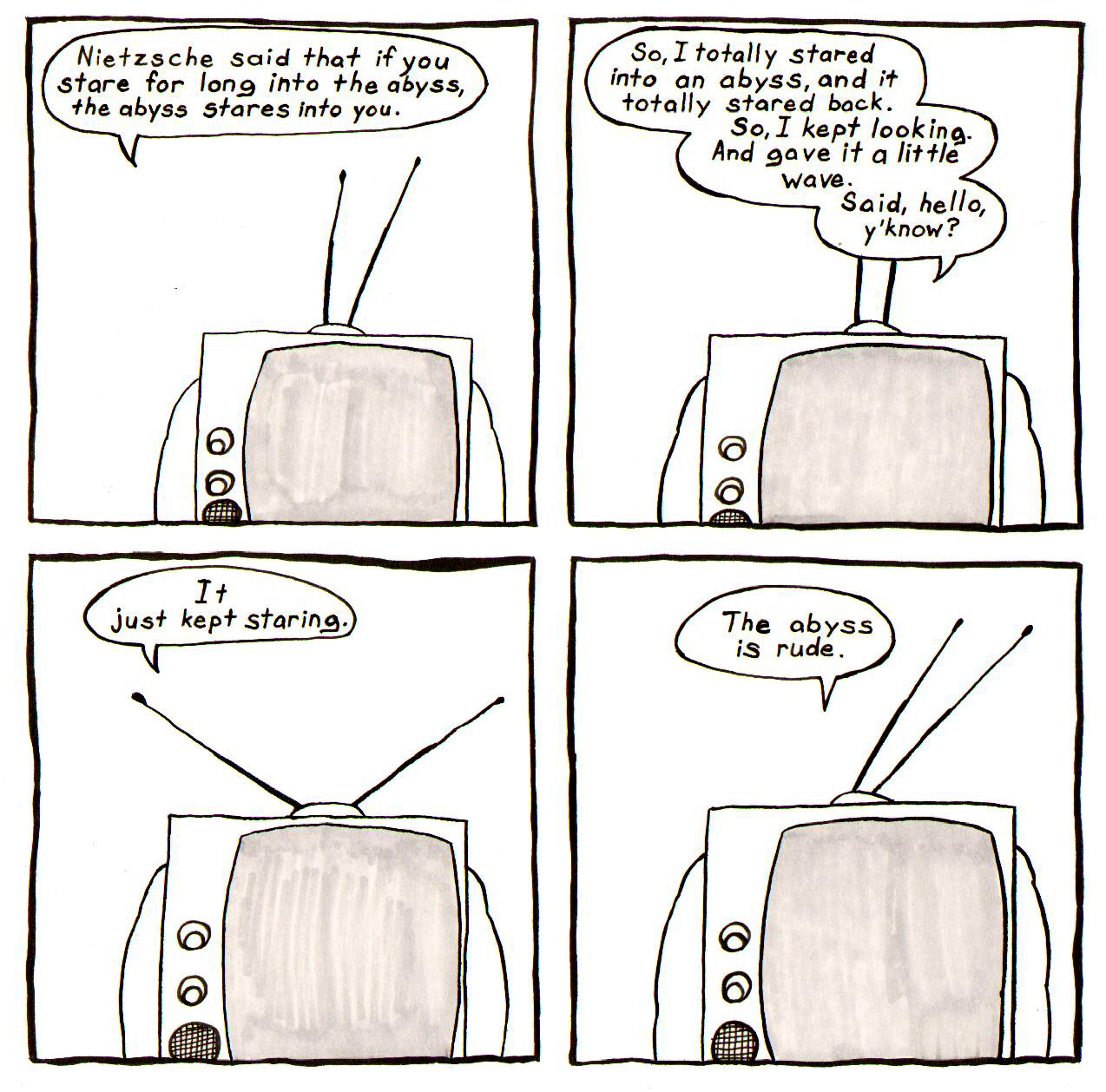 For a long time, I have been pretty into this philosophy of mine. It’s not deep philosophy, like you study in Western Civ. It’s simply the Philosophy of being human (which, in a lot of ways, most philosophy is). Here’s my big idea: we hobble ourselves by looking for consistency in our thoughts.

I’ll go a step further and say that the whole idea of “hypocrisy” is misleading. We love to point out the moral inconsistencies in people we disagree with. One that I ran across on the same day that I wrote this: the inconsistency of Republicans railing against Big Government yet wanting to pass laws saying that same sex marriage isn’t marriage. That’s pretty Big Government, right?

I don’t agree with them on either point, but I don’t care that it’s inconsistent. We are all inconsistent. Inside of us, there are many conflicting values. In some areas of our lives, we may have very clear liberal values (always voting for the most left leaning political candidate, for example), but in other areas of our lives our values might lead us in a pretty different direction (such as investing for retirement in mutual funds and willfully ignoring the fact that those funds probably use your money to support some terrible, terrible companies that don’t share your values).

I’m not saying we shouldn’t try to aim for moral consistency, but I do think we confuse ourselves seeking a perfect moral clarity. The best we can do is look internally and try to find clarity among our values. In Sex, for example, don’t kid yourself: don’t tell yourself that all you care about is someone you can have deep conversation with when, in reality, you’re also as guilty of objectifying your paramour as everyone else is of theirs. Seek clarity, understand and set your course with intention but not a false certainty.

The Twitter version of my big idea: embrace ambivalence. Not a shoulder shrugging ambivalence but the deep ambivalence of being both attracted and repelled by the same decision (Man, I want to go on an adventure thru Europe and do it all but Dear God that would be so much money gone forever).

I may say more about what I’ve been doing to rub this idea up against other philosophers in future blog posts, but, as you might imagine, one of those philosophers that I have been dipping my toes into is Nietzsche (as the comic above indicates). I have, after all, always loved this little vignette of his, about the abyss.