Staying up too late reading 'The Instructions' by Adam Levin

I have been reading The Instructions by Adam Levin for a very long time. It’s a long book. And I had gotten close to the end and the end takes forever but it’s off the chain and I had to finish it.

I got to the point in the night when I had to either stop reading it or continue and have a big fail the next day.

I kept reading The Instructions.

Let’s talk about The Instructions. 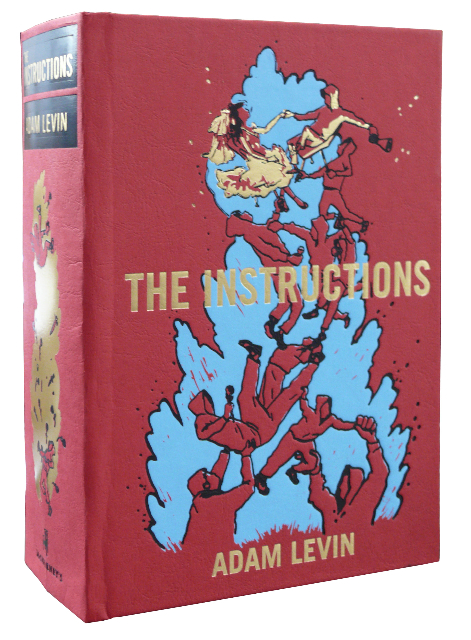 It’s weird that I even read The Instructions. First of all, it’s a McSweeney’s book. I swore off McSweeney’s stuff a while back, even though I had once been a really big fan. It all just felt much too inward focused to me. It was so post-literature that it didn’t even seem like literature mattered anymore.

I am somewhat coming back around on that, especially now that it’s sunk in for me that the online McSweeney’s is a sort of smarty-pants version of The Onion. I don’t know why I never quite saw it like that before, but I didn’t. So it makes me like it better.

But when I encountered The Instructions for the first time I hadn’t quite given McSweeney’s another chance quite yet. I was in D.C. with my lady friend and we were wondering around my old neighborhood of Columbia Heights and what I was marveling at was just how much it wasn’t my old neighborhood anymore. How it was this crazy built up uber-yuppie the-suburbs-come-to-the-inner-city kind of thing (there is nothing about the new construction of Columbia Heights that makes any sense in the vernacular of the rest of that area if you go more than three blocks in any direction – I promise).

I had been to newly rebuilt Columbia Heights before, but I hadn’t really spent time there. We were there and we were hanging out and I spotted The Museum of Unnatural History. We had some time to kill so I suggested we go see what it was. So we went and almost as soon as we got inside I suspected, “This is one of those weirdo McSweeney’s storefronts, isn’t it?”

So I pretty much immediately lost interest but there was an affable kid in there and I asked him if my suspicions were right and he gave me a very long winded and enthusiastic version of what could have simply been summed up with “Yes.” We poked around a little and that’s when I happened on a copy of The Instructions and its typically (for a McSweeney’s book) retro looking cover and its (unique to itself) ungainly size. I picked it up and read the back and it kind of appealed to me. I think maybe I even opened it up and read a few words tho I never really read inside books in bookstores – no patience for it.

Something about it got me interested so I snapped a photo of it with my phone because I didn’t have my notebook and we left.

Here’s the weird part. And I can’t say this in any sort of clear way because I don’t really remember, but the way I remember the jacket text reading, the book was a sort of adventure story where devil-may-care characters encountered bizarre adventures and people. Sort of. I don’t know.

All I know is that the idea I had in my head about the book didn’t have anything to do with what I read in the book. Which is, in fact, an unbelievably detailed account of a just a few days in the life of one very extraordinary young boy.

So weeks later I bought the book for my Kindle and then I started reading it and I pretty quickly realized that there was no way there were going to go on the weird epic journey that I had somehow got to thinking I was in for, but it totally grabbed me anyway.

And the ending… well, the ending is batshit crazy. I am not saying that judgmentally. There’s no judgment in that assessment. It’s just a statement of fact. I can’t say more without giving things away (and though I love spoilers – I know most people don’t so I’m not going to spoil anything).

It’s strange. It feels like this total bait-and-switch. Maybe it was. Maybe that was their nefarious plan. Maybe they were so confident in The Instructions once they got to reading it that they just made up whatever the hell they wanted to get you to start it and then they let it take you from there.

And I can’t check the text of the back of the book right now because, like I said, I didn’t buy that copy. I bought it later. On my Kindle.

It’s an amazing book. I can’t remember the last time that I read a book and well before I even finished it absolutely knew I’d read it again. Normally, I’m not much one for re-reading books. I feel like there are so many books to read, but there are also many ways to read a really good book (many books within the book) and this book bears those other readings (as the author flat out tells you it does as you get close to the finale – which is breathtakingly arrogant but also makes complete sense it context)(but still).

Just so it’s clear I’m not giving Adam Levin a total blowjob as I write this though, I will say this: the book shows you it’s a McSweeney’s book with “The Coda,” which is its epilogue. The Coda (the very end) is annoying in that way that I think all McSweeney’s efforts are required – at least at some point – to be really annoying. I get it. It makes a good point and it does it without explaining the point but more showing the point and yet it also shows that they are all very very smart but sweet Jesus – enough already. Enough.

The Coda – for all its smarts and all its good-pointedness – just goes on way too damn long and dwells much too deeply in its annoyingness. I’m sure people will say “it’s genius.” But remember this: any time anyone tells you anything is genius what they are really telling you is that they think they are genius enough to recognize the genius that you aren’t the genius to see.